Food fraud has been conducted since ancient Greek and Roman times but is rapidly increasing due to the complex, global supply chain, pressure on suppliers to reduce prices and the possibility of large profits.

Food fraud has gained increasing recognition and concern since 2008 when milk and infant formulas were contaminated with melamine in China, followed by horsemeat being detected in products labelled as beef in Europe in 2013. Food fraud is typically motivated by profit, some forms can be harmful to consumers or mislead the purchaser/consumer as to the authenticity of the food or animal feed.

Food fraud is the:

It includes Economically Motivated Adulteration (EMA), stolen goods, grey market and counterfeiting3. It becomes ‘food crime’ when the fraudulent activity is no longer conducted by individual criminals, but by a group with the intent to deceive and harm businesses or consumers purchasing food products4.

There is a growing motivation to adulterate or counterfeit food by individuals or groups. Food and drink in the United Kingdom (UK) is more than a £225 billion industry1 and as food fraud can result in thousands of pounds of profit, from just one shipment of fraudulent food2, it can be a very profitable venture.

Food fraud, like food defence, is a part of the food protection ‘umbrella’.  Both can be economically driven, however, the motivation behind food fraud is monetary gain, whereas the intent behind food defence is to cause harm through any form of intentional, malicious adulteration or economic disruption, and is typically ideologically motivated.  Areas impacted by food defence programs include cyberattacks and sabotage.

In 2008 milk was intentionally diluted and adulterated with melamine to increase the apparent protein content, due to the increased nitrogen content from melamine. In powdered infant formula made from the adulterated milk, melamine levels as high as 4,400 mg/kg were recorded6.

What started as a food fraud incident became a food safety issue when the infant milk formula was linked to urinary tract ailments (crystals and stones in the urine leading to kidney stones)7 resulting in the hospitalisation of nearly 52 thousand infants and 6 deaths8.

Incidents of food fraud have been recorded dating back into antiquity, with some examples being: 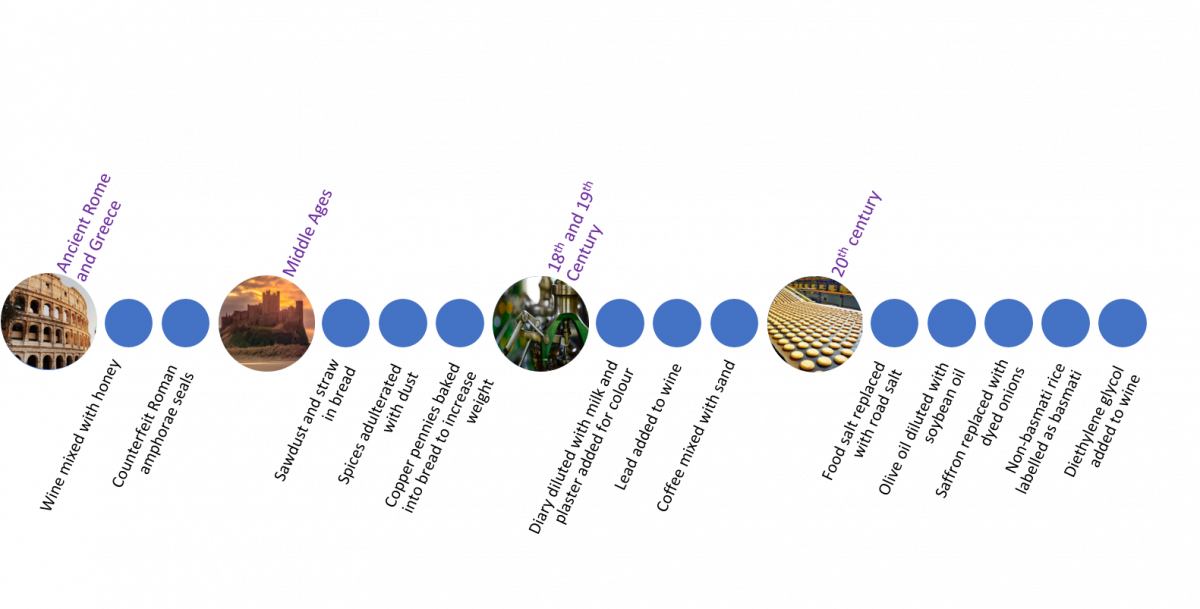 2019 - traditional pig breeds used for the production of Parma and San Daniele hams were crossed with breeds that grow faster. The resulting higher water content did not meet the requirements of the Protected Designation of Origin (PDO)10

2007 - pufferfish mislabelled as monkfish in California and Hawaii, USA14

2003 - insecticide mixed into group beef by a supermarket employee in Michigan, USA15

Products most at risk of food fraud16

Numerous factors contribute to food fraud, which can vary from country to country, the level of development and regulatory structure:

A food fraud vulnerability plan documents the relevant assessment and mitigation measures developed by a cross-functional team. The elements of such a food defence plan includes the following:

Food fraud vulnerability assessments and mitigation plans require a cross-functional approach across the whole organisation and a focus on prevention, rather than detection followed by a response19, 20.

Food fraud vulnerability assessments have similarities to Hazard Analysis and Critical Control Point (HACCP) plans and should ensure that21,22,23:

Hazards to be considered should include as wide a range as possible, and may include:

VACCP (Vulnerability Assessment and Critical Control Point) is a method used to assess and mitigate vulnerabilities from food fraud/authenticity and possible adulteration. The process is similar to HACCP and TACCP (Threat Assessment and Critical Control Point), although the latter is designed to protect against intentional adulteration for food defence purposes. TACCP can be linked with VACCP to identify threats and vulnerabilities.

Mitigation strategies should be implemented effectively to prevent or minimise vulnerabilities to food fraud. They must be specific to each company, manufacturing site and product.

To ensure the correct implementation of each mitigation strategy, companies should:

Prevention of food fraud must be cross-functional (not just a food safety function issue) and implemented across businesses and supply chains22,24. Food fraud training of all departments, including Procurement and Operations is important to ensure:

The food supply chain is complex which challenges the capabilities of analytical tools. Testing methods are usually targeted at the expected type of fraud, e.g. sugar added to honey, and only allow for a ‘snapshot in time’.

Institute of Food Science & Technology has authorised the publication of the following Information Statement on Food Fraud.

This is an update to the Information Statement that has been prepared by Julie Ashmore FIFST. It has been peer-reviewed and approved by the IFST Scientific Committee and is dated October 2021.

The Institute takes every possible care in compiling, preparing and issuing the information contained in IFST Information Statements, but can accept no liability whatsoever in connection with them. Nothing in them should be construed as absolving anyone from complying with legal requirements. They are provided for general information and guidance and to express expert professional interpretation and opinion, on important food-related issues.