Reading University Agricultural Department has been undertaking research on cocoa since the 80’s, and has established itself as a leading research centre on cocoa. It cooperates with other international/national cocoa research institutes mainly in the cocoa growing countries. It also has trained many overseas Ph.D. students.

On the 21 February 2018, 9 IFST attendees gathered in the Agriculture Policy and Development Building, where Dr Andrew Daymond gave an introductory talk about the research projects on cocoa and the ICQC. For the past few years, research into the effect of different factors linked to climate change on cocoa plant growth have been the subject of several Ph.D. theses, funded by Cocoa Research UK (http://www.cocoaresearch.org.uk/cruk.php). Higher CO2 levels tend to encourage better growth of the cocoa plant, but it also increases the water requirement. However, the cocoa plant appears to adapt to these changes, and the differences are less in the second year. 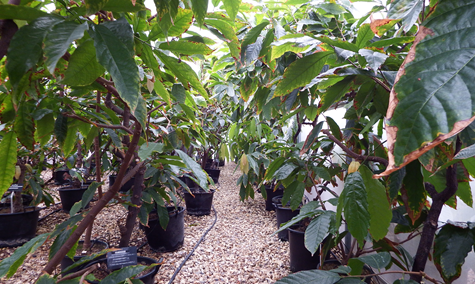 The other research areas on cocoa include modelling the changes due to climate change taking into account of the data obtained over several years. Looking at the uptake of cadmium, because there are limits imposed by EU Regulations, and how this can be minimised by studying which varieties of cocoa take up less cadmium and why.

The visit decamped from the University campus to the ICQC based on a University farm in Shinfield 4 miles away.

Cocoa is an important crop grown in the tropics, but it has suffered from some serious crop diseases such as Witches Broom, and CSSV. Although they can have a devastating effect on cacao production, fortunately they tend to be restricted to certain cocoa growing areas, and hence it is important to stop the spread of these diseases to other main cocoa growing areas. This was one of the reasons for setting up the ICQC in the University, which is jointly funded by the USDA and the Cocoa Research Association. The Centre is regarded as an intermediate quarantine facility, and is used when germplasm material, which usually is destined for plant breeding is moved from one cocoa country to another. Cuttings of cocoa are grafted on to well established root stock, and grown over 2 years where they are monitored daily for any emergence of disease, and a DNA virus check is also carried out routinely. The facility has 400 cocoa accessions, and is also a resource for the research projects at the University. The tour round the Centre was very interesting just to see the wide range of colours of cocoa pods, the innovative irrigation system and the fact that cocoa plants, which are tropical, can thrive in the SE of England.