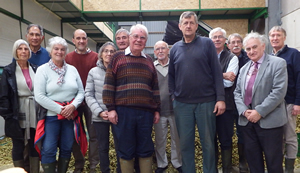 Food science is concerned with the whole of the supply chain from farm to fork. And it was this in mind that the Branch organised a visit to Redland’s Farm hop farm near Salehurst on 16th September. All 13 of us met for lunch at the Salehust Halt pub where we sampled Harveys Brewery’s excellent Sussex best bitter made with eponymous hops from last year’s harvest on the farm we were about to visit.

On arriving at the farm, we were warmly welcomed by the owner Mr Andrew Hoad who described the context and background to hop production in England and across the world. English hop gardens (in Kent and Sussex) or hop yards (in Worcestershire) have been in decline for a number of years but recently with the rapid growth of brewing, particularly of microbreweries, there has been some resurgence. English hops have unique characteristics because of both the types of soil and the climate. Conditions are not really ideal and yields vary from year to year, in contrast to, say, the Yakima Valley in Washington State, the main hop-growing region in the USA.

The grow four different varieties (East Kent Goldings, Sussex, Progress and Challenger) of hops on the farm along with some arable and some cattle. The variety Sussex was found growing wild on a neighbouring farm and discovered to have some attractive characteristics for brewing. Andrew supplies it to Harveys Brewery in Lewes. He has won awards for the quality of this hop and the brewery has won CAMRA’s Champion Best Bitter of Great Britain. 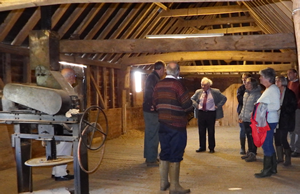 It was the middle of the harvest and they were very busy on the farm. Nevertheless, Andrew was very generous with his time and we spent over two hours being shown how the hops were stripped from the bines, sorted and then taken the brand-new oast for drying. Andrew and his sons had built the new oast drying facility from scratch and this season was the first opportunity to test it out.

The machinery stripping the hop cones from the bines was very old yet there’s nothing modern to match it. It did need quite a lot of care to ensure that it worked properly.

In the new oast house, we saw the new drying system that had been built over the summer. It appeared to work extremely well with the hops being spread evenly across the chamber before warm air was blown upwards through them. Andrew and his sons keep applying little tweaks it to improve the performance.

Towards the end of the tour, we visited the old, traditional oast house to see what it used to be like. This was used for last year’s harvest and Andrew was obviously a little sad to see it now idle. It was an excellent visit and he Hoad was obviously passionate about everything. He hopes to retire soon and hand over to his sons so we hope that they continue his enthusiasm long into the future.