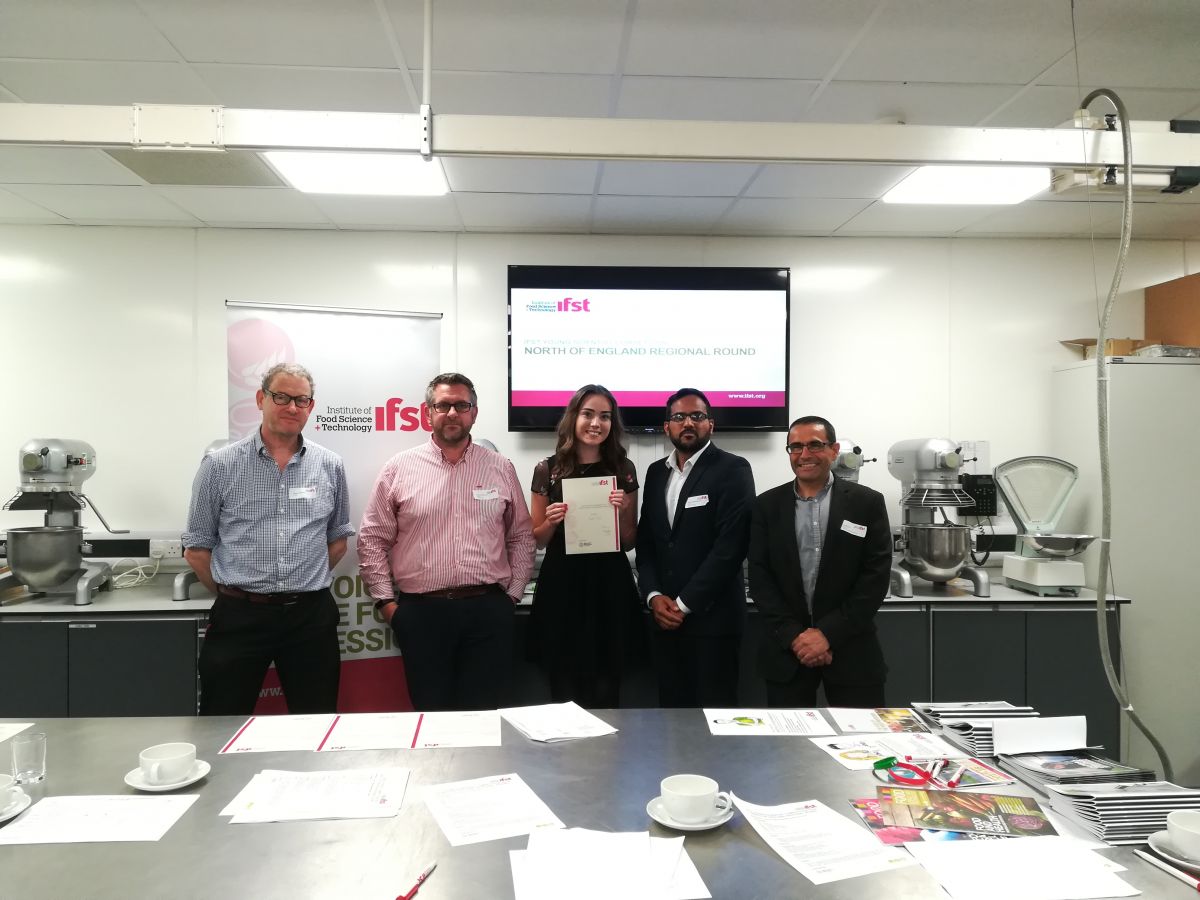 IFST Young Scientist Competition is an annual competition offering undergraduate and postgraduate students based in the UK the opportunity to present their current or recently completed food-related project (e.g. food science, food technology, human nutrition as well as other areas that help understand food) in front of their peers and to a panel of food professionals. This year, we had a large amount of student applications and as such it was very difficult for the preliminary judges to shortlist the finalists for the regional rounds. Similar to previous years, IFST held four regional rounds enabling finalists the opportunity to present their research to a judging panel of professionals in the sector.

The North of England regional round was held on Wednesday 5 June and was hosted by Manchester Metropolitan University. A total of ten finalists were shortlisted to present their research to an audience and a judging panel. The competition was judged by 4 judges; Shajo Jose (Member of IFST Midlands Branch Committee), Alistair Thomson (Member of IFST North of England Branch Committee), Ivan Bartolo (Regulatory Affairs Advisor, Sea Fish Industry Authority) and Will Ballantyne (Technical Service and Pilot Plant Manager, Tate and Lyle). 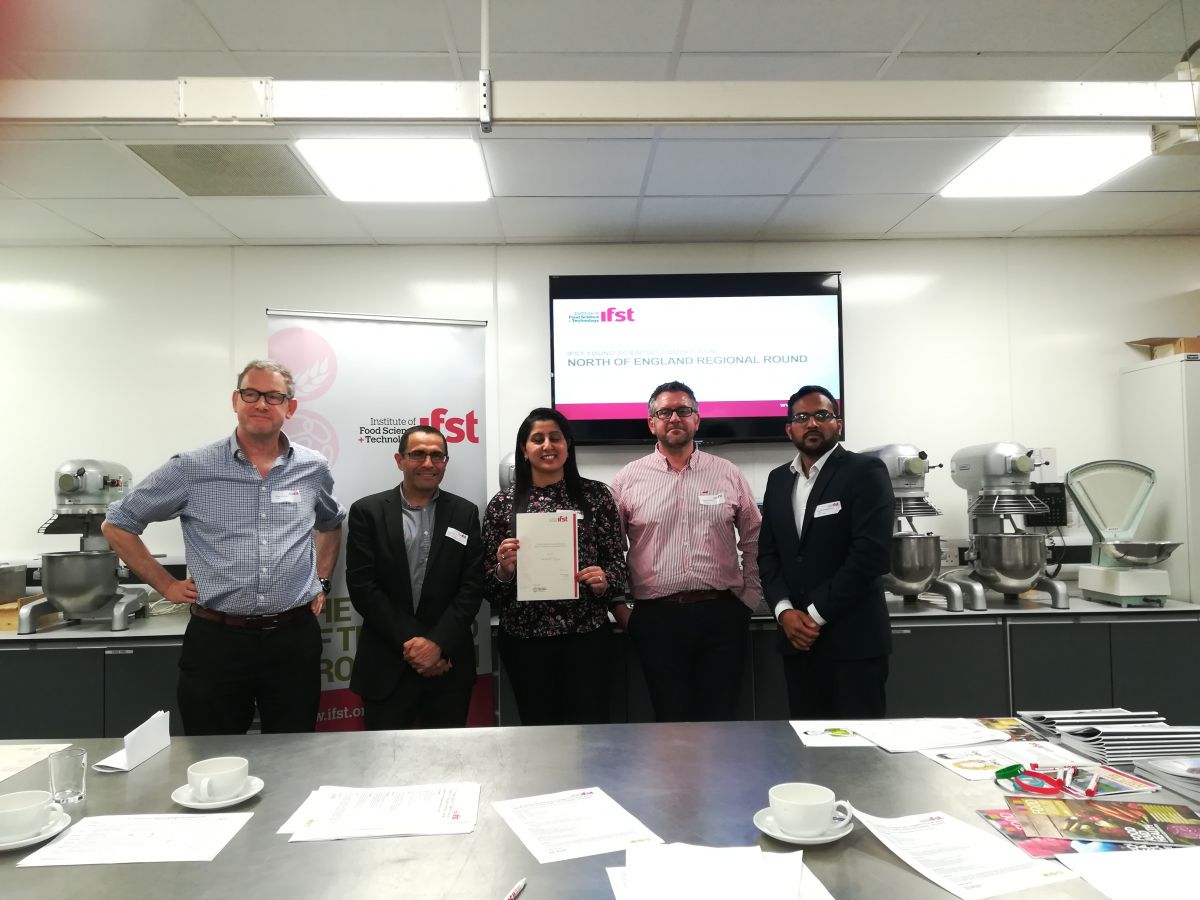 With six undergraduates and four postgraduates, judges were impressed by the high standards and the range of topics; from alcohol beverages to children’s health and turning cake to beer. Kate Dines (Manchester Metropolitan University) won the undergraduate competition with her project on “Incorporation of prebiotics into a baked functional food product”, with Alexander Baker (Manchester Metropolitan University) being the runner up with his project on the “Effect of colour intensity on sweetness and flavour intensity in non-carbonated sugar-sweetened fruit-flavoured beverages”, and Ben Kew (University of Leeds) taking the third place on his project on vegan friendly and palatable plant proteins in food industries.

Saravjeet Bajwa (Manchester Metropolitan University) won the postgraduate competition with her research on “Antimicrobial properties of potential bioactive compounds of Indian spices and herbs prepared using ultrasound-assisted extraction process”. Kate Porter (Northumbria University) took the 2nd place with food commodities whilst Nimra Shahab from Sheffield Hallam University took the 3rd place with a project on biohydrogen and its innovations in the food industries. 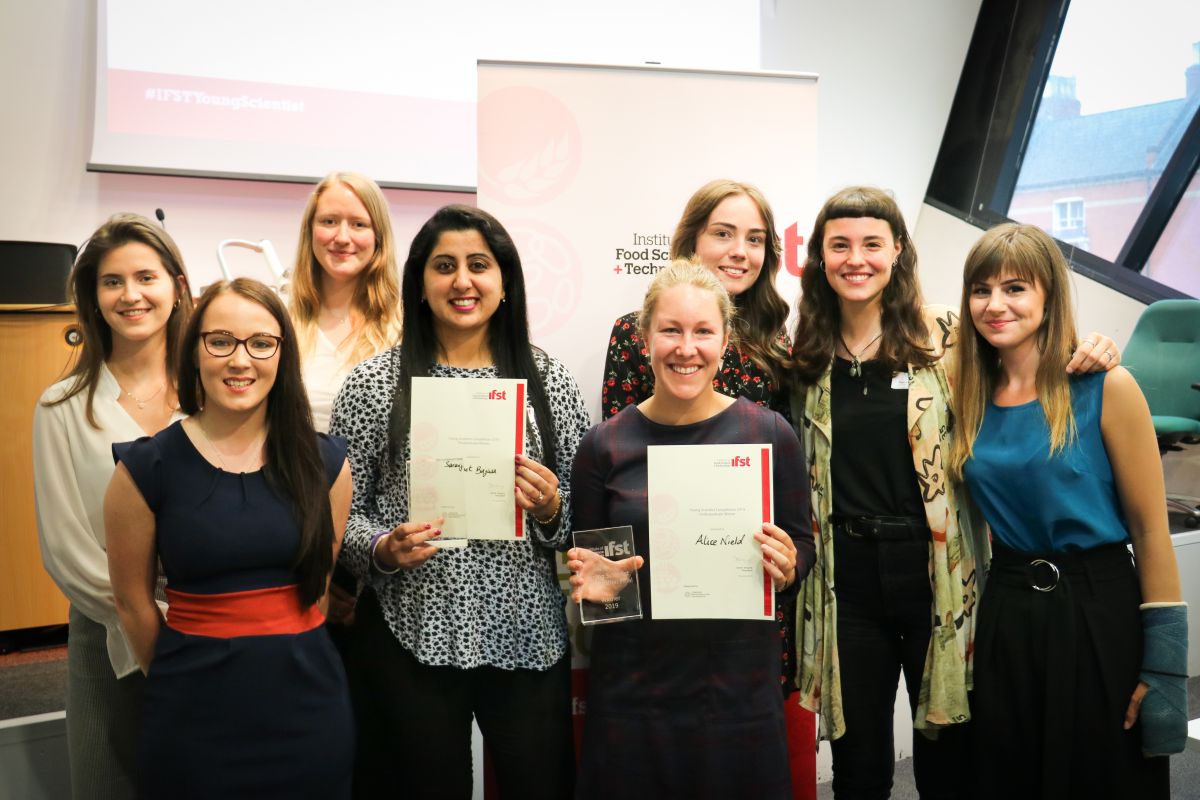 In addition to the regional rounds in Scotland, Northern Ireland, North of England and South of England, this year we hosted a national final on 18 June in London to crown the IFST Young Scientists of the Year in the undergraduate and postgraduate categories. The final was judged by a panel of three judges: Professor Julian Cooper (Chair of IFST Scientific Committee), Alastair MacGregor (Vice Chair of IFST Education and Careers) and Sheila Kupsch (New Products Development Consultant and IFST Fellow). The judges had a tough decision to make. Congratulations to Alice Nield (University of Reading) and Saravjeet Bajwa (Manchester Metropolitan University) who won the national final of the IFST Young Scientist Competition in undergraduate and postgraduate categories respectively. Alice impressed the judges with her presentation entitled ‘Production of GOS from aerobic probiotics’. Saravjeet talked about antimicrobial properties of potential bioactive compounds of Indian spices and herbs.

Alongside the competition, we had the honour of having Dr Hazel Gowland, Expert in Food Allergy Risk, Visiting Fellow – University of Southampton as our keynote speaker. She delivered a talk entitled “Eat, snog or avoid? – What to do about food allergy”.

A big thank you to all the students who took part in this year’s Young Scientist Competition and a special thanks to all the universities who hosted and regional rounds and the judges for giving up their times.