Kate Halliwell, Head of UK Diet and Health Policy at the Food and Drink Federation (FDF), chaired the event opening with the comment that there is a debate on the nutritional impact of selecting a “free from animals” diet

Explaining that the IFST events are there to help cross the boundaries between food science and nutrition she pointed out the rise of Plant based diets and how the term means different things to different people.

Photos from the event: 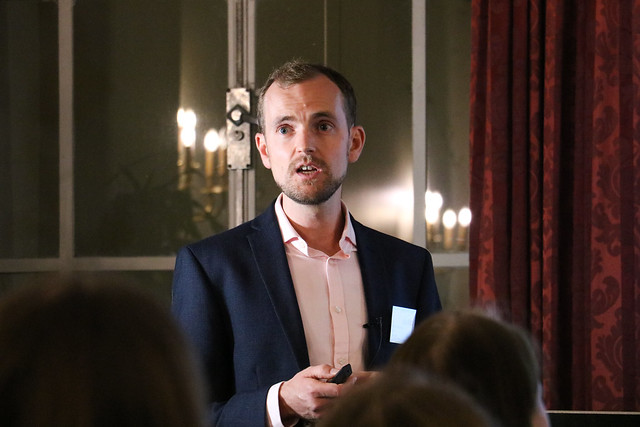 Dr Steenson gave an overview of the considerations of restricting and eliminating animal products in the diet. Strict vegans and vegetarians account for a small proportion of the population but important nutrients for growth and development come from animal-based sources and people need to be aware of the shortfalls. He gave the example of vitamin B12 and haem iron from meat. The issues of bioavailability were discussed as the action of calcium, iron and zinc in the body may be inhibited by the presence of phytate in plants

There have been studies in infants and children following a vegetarian diet, but these did not show differences in zinc and iron status from those eating diets containing animal sources. The studies, however, have shown widely varying statistics.

The point was made that adolescents in general eat a poor-quality diet regardless of the diet they follow. Levels of minerals such as iron and zinc are a concern for adolescent girls.

He concluded by saying that it’s more important to focus on dietary quality rather than diet type.

Quorn is the world’s largest producer of meat alternatives, and the background to the story of its production lies in health psychology

Dietary ethics play a role in the uptake of these diets and to illustrate the point an image was displayed of a cattle feed lot in the USA showing effluent run off into the sea…. The issue of environment is linked to population health for their business model.

Tess discussed consumer uncertainty about getting sufficient protein from plants foods and explained that Fusarium spores are fermented to make Quorn protein.

Not all alternative proteins are healthy but glycoprotein in Quorn is a complete source of protein. There is 6% fibre in Quorn, it’s good source of zinc and high in choline. A World Economic Forum study showed mycoprotein found in Quorn is equivalent to legumes from health point of view. Quorn Foods are engaged in a muscle building project with Exeter University and partner with Greggs stores and Greggs Foundation to educate children about healthy eating and sustainability.

Tess’s closing comment was that better regulation is needed for innovation in the plant-based food space.

Session 3: A US perspective

Entertaining stories about her life and work peppered this presentation. Raised as lactose vegetarian by her Indian parents in the USA, Kantha said that in the West of USA people believed that if you didn’t eat meat you would be anaemic yet 80% of Indian community can’t afford meat therefore eat a plant-based diet.

She tackled the media saying that in the USA people pick up nutrition knowledge from USA today, Dr Oz etc these people create the plant-based craze. Citing examples such as the cell culture burger, Impossible burger and Sushi tuna alternative made from tomatoes she questioned the nutritional integrity of these products saying that the food industry can’t replicate taste and flavour with protein, so they use refined starch and sugar.

A stark example was given on neural tube defects on the rise in the USA because yoga mums have been eliminating gluten from their diets even though they weren’t Coeliac and as consequence lack folate found in the foods they avoid.

Kantha is adamant that veganism is not for babies and children and added that there are unintended consequences when you fool your brain by eating meat replacements made from processed legume protein, but you don’t fuel your immune system. She posed the question “are we storing up allergy problems further down the road?”

Lindsey focussed on consumers and asked "What do we want?”

There are structural challenges when animal protein is removed, as plant-based products behave differently and require new formulations. Micronutrients can also be challenge as mentioned in the first presentation.

There was lively participation in the Q&A session from the audience of around 60 delegates with questions on the need for signposting between good nutritional quality vegan food and poor quality. There was debate around which consumers want plant-based meat lookalikes and whether people should be educated to eat more vegetables. The question of fortification of plant-based foods was raised and when it is appropriate to do so.