THE NEXT BIG THINGS IN FOOD SCIENCE AND NUTRITION 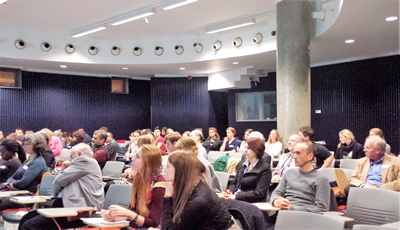 The topics were chosen by students, and three of them were discussed by three well qualified experts in their fields: 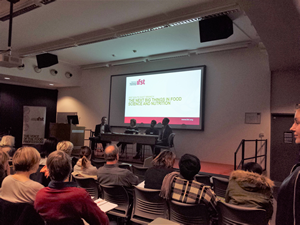 John Bassett chairing the meeting, introduced the talks by pointing out they were all linked together on the basis of providing a sustainable future for the food sector.

Keston Williams is Technical Director at Barfoots, which supplies fruit and vegetables from 32 countries around the world. Apart from the main factory at Botley, the company has offices in Spain, Senegal and Peru.  Keston has worked hard to reduce waste in his own company using anaerobic digestion, and where possible by turning reject produce into added value foods e.g. sweet potato wedges. He discussed the main sources and causes of waste in the UK food sector, and surprisingly enough of the 10 million tonnes of food waste post-farm gate, 7 million tonnes are from households, and probably over half of this is still edible. He appealed to the students as the next generation of food scientists and technologists working in the food industry to think about the options to resolve the waste problem – prevention, recycling and recovery. He also pointed out that consumer awareness and education would also be a significant help in reducing waste.

Marco Springmann from the Oxford Martin School, University of Oxford discussed the health and environmental consequences of moving from a meat based diet to a completely vegetarian/vegan diet. He discussed the health implications of an imbalanced (meat based) diet, showing that globally it is the number one factor responsible for health and mortality risks. The global food and agriculture sector is also a major contributor to greenhouse gas emissions, with most contribution from livestock production. Moving to a plant based diet would not only be healthier, but more environmentally friendly. Modelling the necessary changes to diet to achieve global health and environmental targets would require a 56% decrease in red meat consumption and a 25% global increase in fruit and vegetable consumption.

Wendy Harwood from the John Innes Centre, started by showing the audience what poor specimens major plant foods would be like if plant breeding had not taken place to improve them. There are several ways to improve the genetics of plants. Natural mutations, which have taken place over time, produce new plant varieties such as in the Brassica species, and these mutations can be induced artificially. Traditional plant breeding crosses different varieties to select and improve plant traits. Genetic modification is another technology, where a specific gene is introduced into the DNA of the plant. Now a new technology has emerged from the defence mechanism of certain bacteria – CRISPR-Cas 9. CRISPR is able to repair DNA, remove an existing gene or insert a new gene. The main difference with genetic modification is that CRISPR can do these changes in a precise location, whereas genetic modification is random in its insertions. CRISPR has a great and exciting potential in the medical field, but it will also be very important in the future of gene editing of plants for improved disease and pest resistance, increased nutritional value, increased yields, drought resistance and even improved shelf life. So basically “watch this space”. 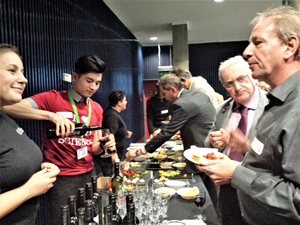 After the presentations, the meeting was open to a panel discussion. Most of the questions were around the status of gene editing by CRISPR, and whether it should be considered as equivalent to genetic modification. Also how consumers and industry can play their part in waste reduction.
The meeting, which was extremely successful thanks to the topics, the excellent speakers, and the hard work of the SE Branch members and London Metropolitan University staff and students in organising the event. It illustrates exactly what IFST should be doing as a representative of the profession i.e. discussing and stimulating the next generation of food scientists/technologists about the problems, new technologies, and possible solutions facing us in order to have a sustainable future.