Report on Tutored Beer Tasting Event at the Institute of Brewing and Distilling organised by the South Eastern Branch of the IFST – 5th July 2016. 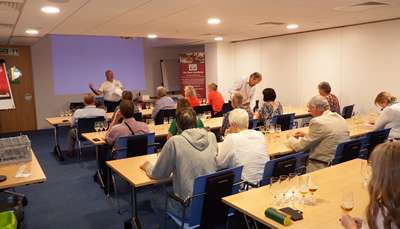 Nineteen IFST members and guests attended an evening of Tutored Beer Tasting on a warm summer’s evening on the southern bank of the Thames, at the headquarters of the Institute of Brewing and Distilling (IBD).  Walking along the Thames, towards the venue, it was clear that this was going to be a grand evening, as Tower Bridge was raised for a Thames sailing barge coming upstream.

Dr Peter Channon of the Southern Section of the IBD organising the evening secured an excellent speaker and tutor, Nigel Sadler, who is an Accredited Trainer for the Institute of Brewing and Distilling and is the UK's first accredited Beer Sommelier.

The initial talk about the brewing process was detailed and the same time succinct. The presentation* was delivered with such clarity and enthusiasm, that each one of the audience, however expert they considered themselves, learned something new. 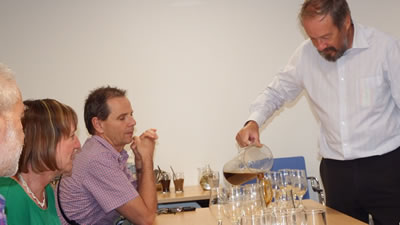 Then followed a series of beers in three ‘flights’, ably chosen, stored and poured by Peter Channon.  The first ‘flight’ included two lagers and a wheat beer. The identities of the beers were given and taste sensations were described by the tutor. It was difficult to detect all the flavours defined but several were and enjoyed by some, but not others.

After that were three ales of varying depth of flavour and alcoholic content. Again there was a difference of opinion between tasters of what was liked and disliked.

Finally, two of the darker beers and a Belgian sour beer (Geuze), were presented and described. The Geuze did cause some palette concerns for the majority of the tasters but did produce an appetising effect and could be taken for instance before a meal.

After a vote of thanks to the IBD, the tutor and beer selector, a buffet was served washed down with several UK beers.

It was a very enlightening evening and one which was appreciated by all attendees.

​* For members only - Please note no material can be reproduced without permission of the Beer Academy.  If you require permission please contact Nigel Sadler at the Beer Academy - Tel: +44 (0) 20 7290 6087 Email:  enquiries@beeracademy.co.uk