A Celebratory Conference - Changing Perspectives in Sensory Science – Past, Present and Future

On 7 March 2019, the Chair of the IFST Sensory Science Group (SSG), Stephanie Mitchell, welcomed everyone to the mini-conference celebrating 20 years of the SSG. Formerly known as ‘Professional Food Sensory Group’ (PFSG), the group provides members with many opportunities to engage and share knowledge and best practice with fellow sensory and consumer science professionals.

There was an air of excitement in the room as around 50 conference participants got themselves ready to take a tour of sensory science from the past, to the present, to the near future and onwards towards a digitally interactive sensorial futuristic world.

Timeline from the past 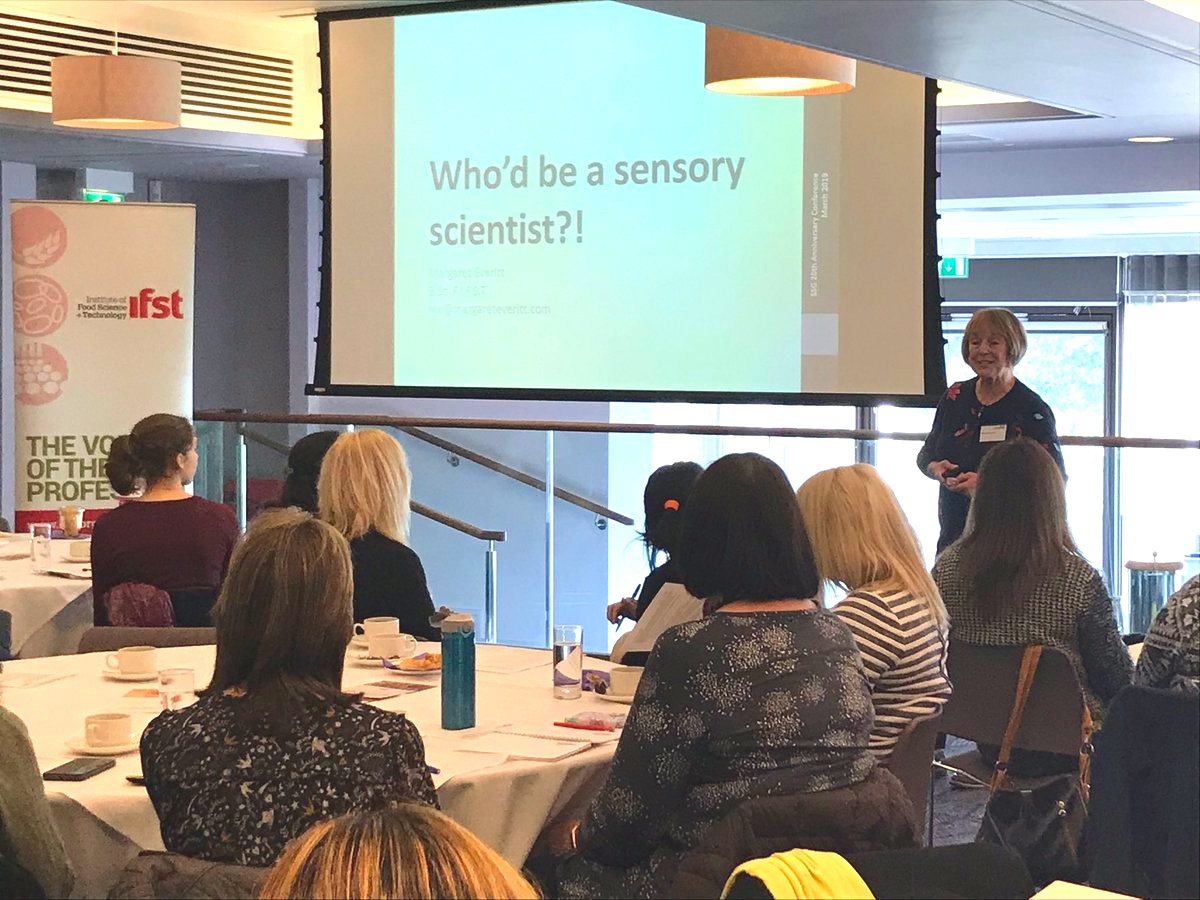 Margaret Everitt FIFST is a long standing, founding member and the first Chairperson of the SSG. Now retired, she has journeyed on an exciting sensory science career spanning both client-side and agency-side and more recently as an independent consultant. In her presentation ‘Who’d be a Sensory Scientist?!’ she described life as a sensory scientist since the 1980s, sharing her experiences of the technological changes and paradigm shifts.

Much of the change Margaret has experienced in sensory science have been down to technological advancements in computers and multi-variate statistics capabilities. Even with all these technology changes, the role of the sensory scientist remains the same, an all-encompassing role requiring business acumen and human resource skills as well as a scientific and statistical mindset.

In the mid-80s Margaret worked in sensory placements as part of her degree, focusing primarily on the application of descriptive profiling in new product development. On graduating, she went to work at CCFRA (now Campden BRI) with techniques such as Quantitative Descriptive Analysis (QDA), Free Choice Profiling, Magnitude Estimation and Time Intensity. Although these techniques had been used academically, some since the 1950s, in the commercial world in the 1980s, they were the ‘new kids on the block’.

Computers leapt ahead with the initial release in 1981 of MS DOS, then Windows in 1985. Specialist sensory computer systems were launched in the late-80s with Fizz Biosystemes and Compusense. These systems dramatically reduced the turnaround times for both data capture and analysis and remain market leaders in the sensory world today. Also in the late-80s, the launch of ‘Procrustes-PC v1.0’ software by OP&P enabled Generalised Procrustes Analysis (GPA) on a PC. Margaret found this very beneficial, especially for helping analyse individual panelist performance more effectively.

As software systems continued to evolve throughout the 1990s along with menu driven front ends, the task of analysing data and conveying results became easier. It grew increasingly possible to do lots of clever analysis and represent this in more engaging graphical ways.

In the 2000s the use of Partial Least Squares (PLS) regression for predictive modelling gained greater commercial application; then in the past ten years the use of Temporal Dominance of Sensations (TDS) data to provide insights about how changes in sensory perception during eating affect liking.

Margaret concluded her talk by describing some particularly memorable moments of her career including the development of foil packs for potato crisps where her team’s sensory data was able to support a new ‘first day freshness’ claim. The actual highest and most alternative experience of her sensory career required her to go up in a hot air balloon to measure the sensory perception and bubble size of Champagne at four different altitudes. At this point perhaps we should have popped the champagne corks again to celebrate the SSGs 20th Birthday!

The challenges of the here and now 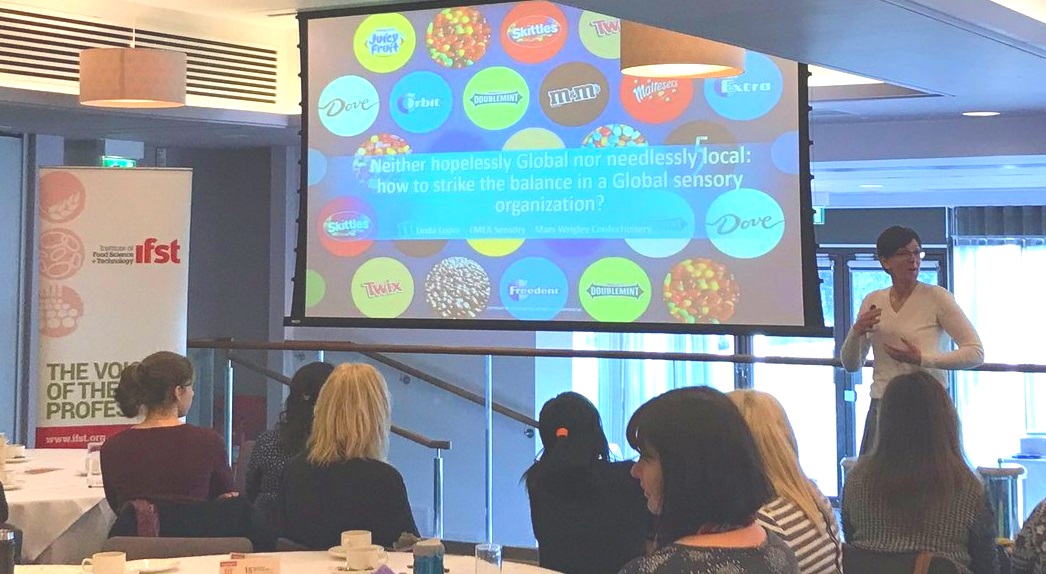 Linda Lopez, Senior Sensory Manager at Mars Wrigley Confectionery gave a talk entitled ‘Neither hopelessly global nor needlessly local: how to strike the balance in a global sensory organisation?’

Linda described the complexity of running the sensory function in a global foods organisation and the need to closely align with changing business models and organisational structures.

Historically, Mars Confectionery had a more decentralised regional approach and Wrigley a more centralised business model. With the coming together of these two different business systems a harmonisation of the sensory function was required across three regional centres.

The US sensory unit was previously using a Spectrum based descriptive analysis methodology whilst the other two sites were using Quantitative Descriptive Analysis (QDA).

The decision was taken to harmonise all sites to use the same profiling methodology - Spectrum. This was not a light decision as sensory panellists trained on the previous QDA methodology would need to be retrained on the new system. In addition the Spectrum method brings extra challenges with the need to ‘calibrate’ sensory panellists with reference samples for each attribute measured. Imagine the complexity of finding relevant reference samples across three different regions. In some cases the reference samples are commercially available products and need to be continually monitored to ensure that they don’t change over time e.g. reformulation, recipe changes etc.

It was a significant programme of change, taking the team 6 months to train new panellists to become a well-functioning Spectrum panel. As the Spectrum method was quite different from the QDA method, it also took 4 to 6 months to retrain the current QDA panel to the new Spectrum methodology.

All of the three sensory regional hubs have now moved to the Spectrum system. The panels are functioning well and the sensory teams that previously used QDA are very happy with the type of data that they are producing with Spectrum.

Creating the near future

Dr Hal MacFie, also a well-known personality in the sensory world as a consultant and trainer, spoke about future challenges ahead in his talk ‘Sensory Science has got to move on!’ 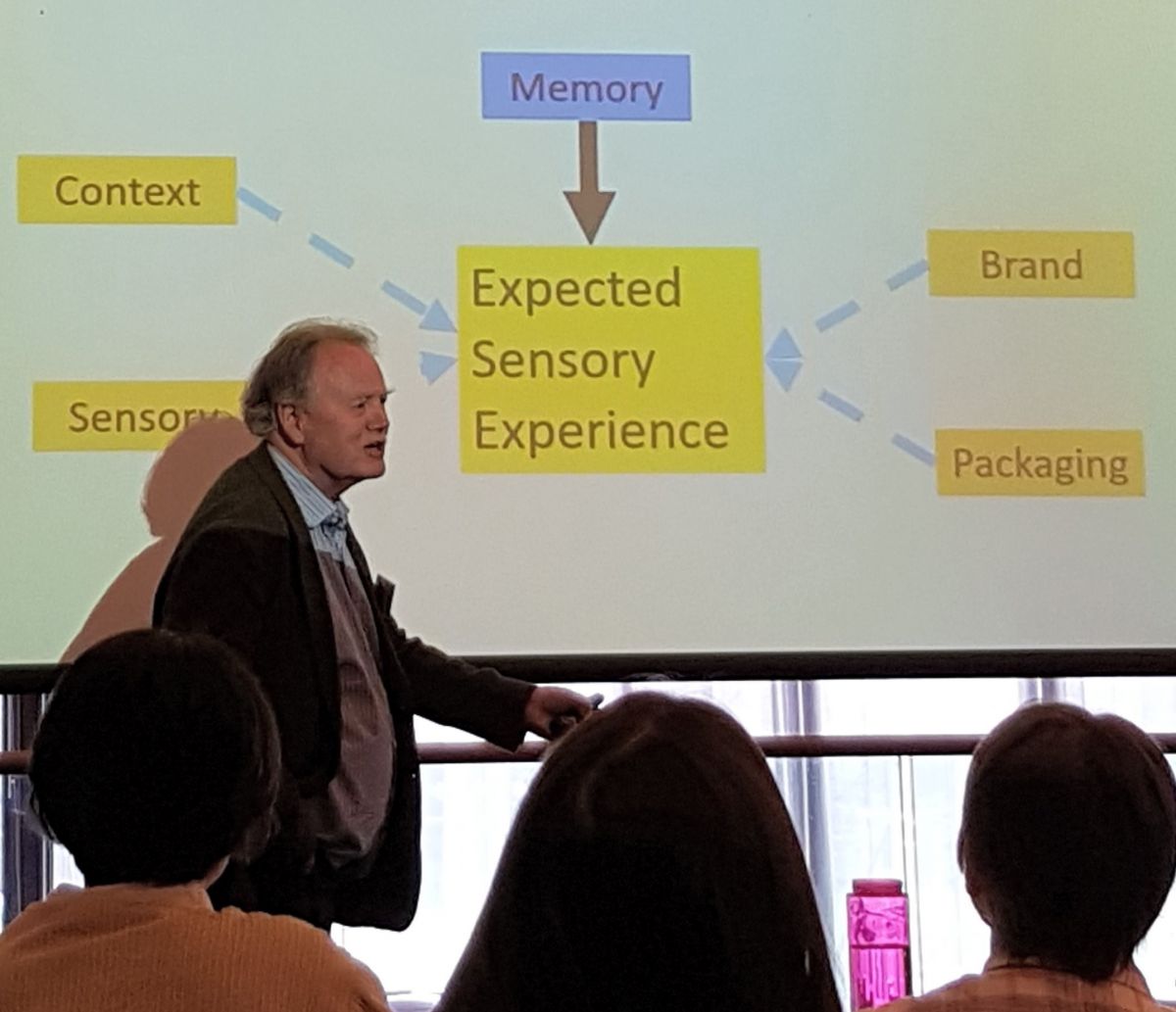 Hal, who originally qualified as a statistician, talked about the ‘face validity’ versus the ‘proven validity’ of specific sensory methodologies. His main concerns are that sensory testing methodologies are often very different from the realities that consumers face. Mostly they don’t come close to real consumer experiences. So thinking about a triangle test, a consumer in their everyday life would never need to taste three chocolate bars to determine which is different.

Other types of tests which Hal believes are more valid and therefore more relevant to the real world include ‘A not A’ tests used with or without a control. He also mentioned questionnaires requiring free text responses, rather than numerical scales, being more valid measures of how consumers normally react to food.

Hal’s main theme is that the future of consumer and sensory science should be focused on understanding and measuring consumer behaviour, especially in terms of repurchasing. This, he felt, is even more relevant today as it is so much easier and cheaper than ever before to recruit and find consumers to take part in research studies.

Hal definitely believes that the future is about the explanation and prediction of consumer repurchase. Although this shifts the balance towards marketing and the consumer, Hal feels that there is still a pivotal role for sensory understanding. Expected sensory experience is an important driver towards repurchase and sensory is an important element of this.

Hal’s final call-to-action is for more academic research connecting consumer liking with purchase behaviour and repurchasing patterns. He is specifically highlighting the need for publications around valid methodologies that are more relevant to real-life and that encompass consumer expectations, choice and context. He’d also like to see these validated methodologies rolled-out and used commercially. 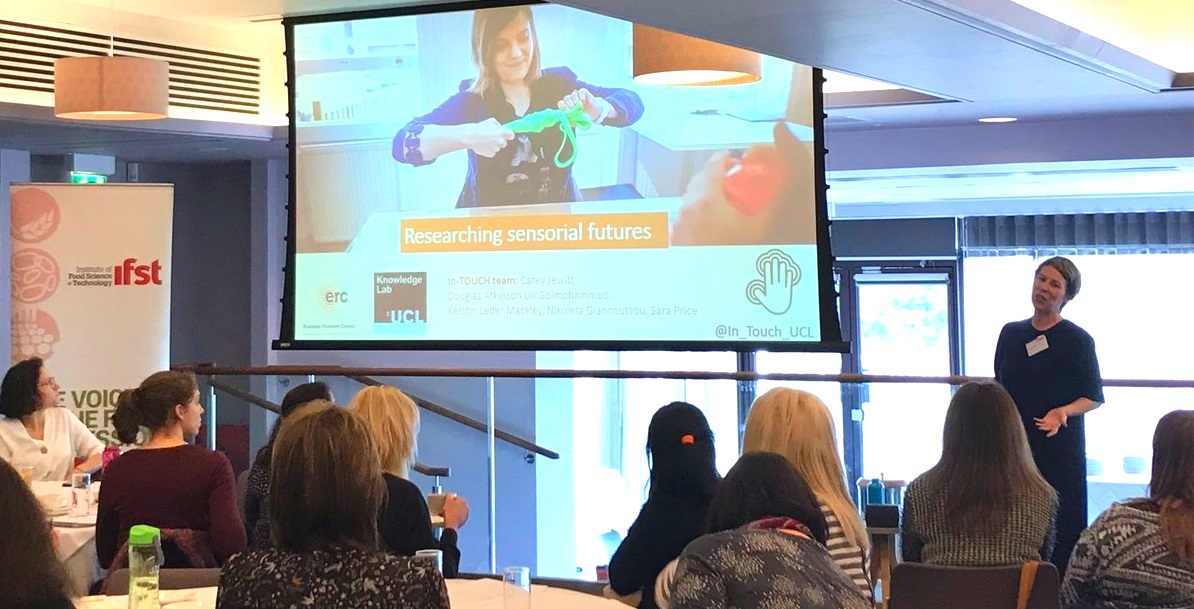 Carey presented work from the IN-TOUCH project (in-touch-digital.com), an ERC Consolidator Award, which explores the social implications of digitally mediated touch for communication.

In order to help define the future it is important to understand the cultural past of touch. Carey described how the role of touch had changed over time, for example in the 15th Century important documents were ‘sealed with a kiss’ to make them legally binding. Over the centuries touch has since fallen out of fashion.

There is increasing concern that digital lifestyles could further diminish and detrimentally affect the relevance of touch in society. Carey’s team are exploring such concerns, and the ways in which digital technologies could actually enhance touch and improve connections between humans.

Some of the themes they are working on include researching touch between parents and their babies – and particularly trying to understand how digital technologies become part of the multi-sensorial experience involved in the ritual of putting baby to bed and creating the right environment for sleep. 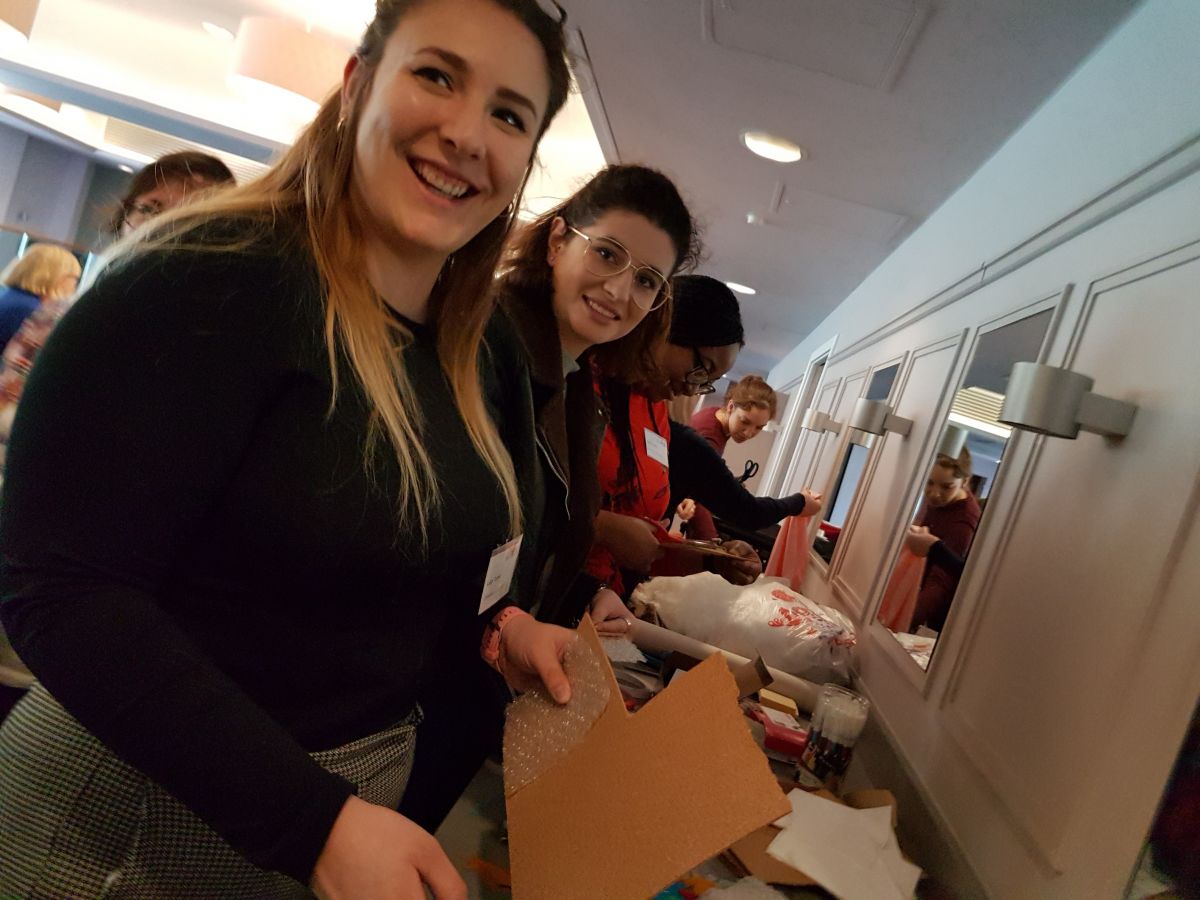 The team are also experimenting with the rapid prototyping of digital touch devices to tap into the socio-technological imagination of touch. This involves combining teams of designers, technologists and end-users working together on identifying issues and developing solutions to inform future thinking and product design.

Carey facilitated a creativity touch workshop session at the conference to help us experience activities involved in imagination techniques. Participants worked together to explore stimulating and novel touch sensations of different materials. We were amazed at the level of communication invoked between us all when we came to describe what we felt about different touch sensations.

Onwards to our sensory future

At this point in the day’s proceedings the birthday SSG conference was drawn to an end. We all left to return to our current sensory roles feeling especially excited and enthused and looking forward to helping make the future for sensory!