A Day in the Life of a Pangborn Ambassador

As a member of the IFST Sensory Science Group’s Committee, I was fortunate to be asked to be an ambassador at the 13th Pangborn Conference. This bi-annual symposium is the foremost Sensory Science Conference, held this summer in Edinburgh. This year it brought together over 1200 leading pioneers from industry and academia.

It is named in memory of Rose Marie Valdes Pangborn (1932 –1990), a pioneer in the field of sensory analysis. As well as teaching and mentoring at University of California, Davis (UCD) for 35 years, she also published over 180 papers and co-founded The Association for Chemoreception Sciences, which is still shaping the science behind the food we eat today.

With this spirit in mind, the Pangborn Ambassador Role was introduced at the 2013 conference. “But what do we actually do?” was the thought on many a novice ambassador’s mind. After being assured that the main thing is to be welcoming, we embraced our new role!

In fact, we were totally prepared with a call where Janet Haynes, from Elsevier (organizers of the conference since 2003), ran through everything people were likely to want to know, and more. We were provided with an information pack and the all-important sash! - tartan to represent Scotland with a rose for Pangborn. The team were also well organized with Lauren Rogers coordinating shifts and suggesting locations where we might be most useful.

On the ground, the queries ranged from the practical “Where is the … (often Tinto!) room?”, “When are the poster sessions” to the forward planning “How can I register for the 2021 Pangborn Conference?” One ambassador had to help wrestle a poster from its container where it had become VERY stuck! There were even a few “What’s the sash all about?!” Overall it was great for attendees to have an informal point of contact who they could ask anything, as well as a welcoming presence. 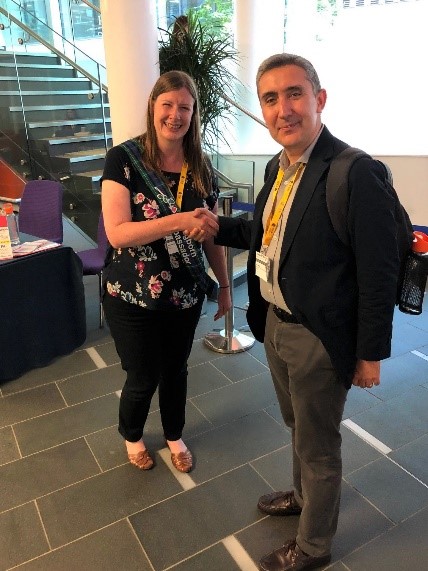